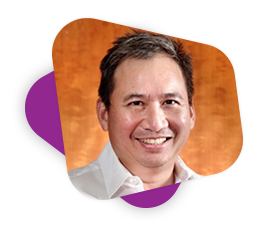 Dr. Januario D. Veloso is currently a consultant  hematopathologist of the Department of Pathology of the UP College of Medicine and the Philippine General Hospital. He graduated from the UP College of Medicine in 1987 and took his rotating internship at the PGH 1987-88. He took up his residency in Anatomic and Clinical Pathology in Albany Medical Center in New York, from 1989 to 91 and later on at Hartford Hospital in Connecticut from 1991 to 94. It was in Hartford that he was given the Award for Excellence in Pathology Resident Education. He also took his Fellowship in Hematopathology from 1994 to 95 at the same institution. He then took further training as a Fellow in Oncologic Pathology in Memorial Sloan-Kettering Cancer Center, New York City from 1995-96.

He has a number of professional affiliations, both locally and internationally. He is a fellow of the American Society of Clinical Pathologists (ASCP) and the College of American Pathologists (CAP), and a regular member of the International Academy of Pathology (IAP) and the United States and Canadian Academy of Pathology (USCAP). He is a full member of the Society for Hematopathology (SH). He is a diplomate of the Philippine Society of Pathologists (PSP). He has been published in several international journals and has presented his paper in various fora on topics ranging from quality control in the laboratory to immunohistochemistry of lymphomas to DNA ploidy of several tumors. Most recently, he has been invited to speak on blood and bone marrow morphology, flow cytometry, immunohistochemistry of tumors, laboratory hematology, blood coagulation, lymphomas and leukemias, and laboratory standardization in several local and international meetings.