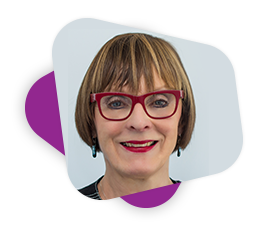 She has worked in the public and private health care sectors in South Africa and England. Having qualified as a registered nurse in Cape Town she went on to specialise in Cardio-Thoracic nursing in London. She ran the Heart Transplant Unit at Harefield Hospital, Middlesex for five years. From there she moved into a variety of managerial roles in nursing, quality and capital and service planning in the National Health Service at district, regional and national level.

Between 1996 and 2002, she held director posts at the Family Health Services Authority (FHSA) in Kent and then East Kent Health Authority, responsible for primary health care, service development and integration. Jacqui was a founder member of the NHS Benchmarking Club, which brought together healthcare managers and clinicians across England to benchmark activity and quality.

In 2002 she was appointed to the Directorate of Health and Social Care (Midlands and East of England) as the Organisational Development and Leadership Lead. She then became the national Director of Career Development and Succession Planning at the NHS Modernisation Agency, Leadership Centre. The Modernisation Agency was disbanded in 2004 and the Leadership Centre merged with the NHS University. Jacqui was seconded as the Interim Director of the Leadership, Management and Improvement School.

In 2005 Jacqui returned to South Africa and joined COHSASA as Chief Operations Manager. She was appointed Interim CEO in January 2015 and to the substantive post in April 2016.

Jacqui has a Master of Professional Studies Health from Middlesex University, London. She is a member of the South African Lancet Commission on High Quality Health Systems. She serves on the Accreditation Council of the ISQua External Evaluation Association and is a Board member of ISQua and an ISQua Expert.

Whether in person or online we enable deeper learning, relationships and decisions.
Staging 15 exhibitions, 110 conferences and reaching over 700,000 healthcare professionals we are where the world of healthcare meets.