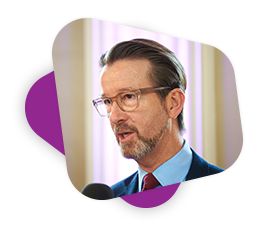 Stephen Carter is the Group Chief Executive of Informa PLC, one of the world’s leading information, knowledge, events and scholarly research businesses, with a career having spanned both the public and private sectors. He joined Informa as a Non-Executive Director in 2010 before being appointed as Group Chief Executive in 2013.

In the private sector Stephen is a career senior executive, having held senior positions in a range of Media & Technology businesses. Prior to becoming the Group CEO of Informa PLC, he was President & Managing Director EMEA at Alcatel Lucent Inc, Managing Director and COO of ntl (now Virgin Media), and CEO and Managing Director of JWT UK & Ireland.

In the public sector Stephen was the founding CEO of Ofcom, the UK’s Media & Communications Regulator, before serving as Chief of Strategy to Prime Minister, The Right Hon. Gordon Brown and as Minister for Telecommunications and Media, where he wrote and published the Digital Britain Report that subsequently led to the Digital Economy Act 2010.

Stephen has served on a number of company Boards. He is curently a Non-Executive Board member of United Utilities Group PLC and the Department for Business, Energy & Industrial Strategy.

He was awarded a CBE for services to the Communications Industry in 2007, and was made a Life Peer in 2008.