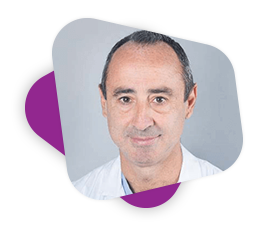 Having obtained a degree in Medicine and Surgery at University of Messina in 1990, he wins a scholarship the following year at the Department of Gastroenterology of Molinette Hospital in Turin, where he begins his practice in digestive endoscopy: in 1992 as fellow at Centre Chirurgical de l’Alma in Paris and at Ospedale Molinette in Turin, in 1993 a specialist in Gastroenterology at the University of Messina. He obtains a scholarship in 1998 for Chirurgische Endoskopie at Universitatskliniken in Tubigen and in 1999 he is fellow in Therapeutic Endoscopy at Wellseley Hospital in Toronto, Canada.

From 1997 to 2005, he is professor of Gastroenterology at School of Oncology, University of Turin. Since 2005 he is Director of Digestive Endoscopy Unit at Humanitas Research Hospital, one of the largest endoscopy unit in Italy with around 15,000 endoscopic procedures perfomed every year. Important is his experience in ERCP, diagnostic EUS, ESD, EMR, stenting, advanced polyp resection, haemostasis for bleeding in the upper and lower GI tract.

He is now Member of the Publication Committee of the World Gastroenterology Association, of the Editorial Board of “Digestive and Liver Diseases”, “Frontiers of Oncology” and “Techniques of Coloproctology”, and Associate Editor of “Gastrointestinal Endoscopy”. Official Reviewer for medical projects supported by the European Community, he is also founder of webendoscopy.com and organizer of one of the largest European Live Endoscopy Courses