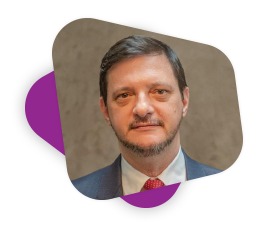 Dr. Manoel Galvao Neto graduated with a degree in Medicine at Bahiana School of Medicine, Bahia, Brazil, in 1989. After finishing a digestive surgery and endoscopy residency pro- gram at the 9th of July Hospital in São Paulo, Brazil, he returned to Bahia as an assistant professor of Surgery at Bahia School from 1993 until 1998. From 1998 to 2000, he was the Coordinator of the Experimental Surgery Research Group. Inspired by the work of his father, Dr. Manoel Galvao Filho—a surgeon who had pioneered laparoscopic surgery in Brazil—and by his beloved mother, Stella—alead- ing operating room nurse who delineated his character, behav- ior, and ethics. Dr. Galvao developed models of video laparo- scopic surgery in rats, using conventional instruments that have helped train over a thousand medical students.

n 2003, this work was presented and defended as his Master’sDegree thesis at São Paulo University proving that medical students, without any formal surgical training, are capable of performing laparoscopic procedures in rats. Dr. Galvao is also a board-certified specialist in Digestive Surgery by the Brazilian College of Digestive Surgery (CBCD), in Gastroenterology by the Brazilian Federation of Gastroenterology (FBG) and in Digestive Endoscopy by the Brazilian Society of Digestive Endoscopy (SOBED). He is one of only a few clinicians that have all three of these board certifications.

From 1993 to 2000, Dr. Galvao was an instructor for the General Surgery residency program at Cleriston Andrade Hospital in Feira de Santana, Bahia, Brazil. From 1999 to 2000, he worked as an assistant surgeon at São Rafael Hospital, Salvador, Bahia, where he was a surgical proctor and responsible for the training of the clinicians on the esoph- ageal manometry service. At the same time, Dr. Galvao established a busy practice performing thousands of endos- copies, hundreds of laparoscopic surgeries, and at least 50 esophagectomies for Chagas megaesophagus.

In 2001, Dr. Galvao returned to São Paulo to work as the Coordinator of the Esophageal Motility Service at the Diagnoses of America Laboratory. Concurrently, he worked as a researcher and consultant and assisted his industry part- ners in Brazil in the development of Brazilian hardware and software on esophageal manometry, pHmetry, high-resolution manometry, and pH-impedance which are currently country market leaders. He also developed training models on a novel interactive digital basis, which have been used to train more than 700 Brazilian physicians. The result of this work led to the creation of the Nucleus of Functional Esophageal Evaluation, the NAFAD, dedicated to spreading the current knowledge on the field.

In 2002, Dr. Galvao joined Dr. Almino Ramos and Dr. Manoela Galvao at the Gastro Obeso Center as the scientific coordinator and chief endoscopist on what has become the most successful bariatric surgery unit in Latin America to date with more than 15,000 bariatric procedures performed. At the Gastro Obeso Center, in partnership with the industry, Dr. Galvao developed training models for laparoscopic bariatric surgery and multidisciplinary teams that became the gold stan- dards in the field. To date, more than 800 surgeons and many more multidisciplinary team members from Latin America (Brazil included), Portugal, Spain, Japan, and India had been trained on those models.

In 2017, Dr. Galvao left the Gastro Obeso Center to open his own practice with Dr. Eduardo Grecco and Dr. Thiago Souza. The Endovita Institute in Sao Paulo was created and in a brief period of time established itself as the benchmark in the field.